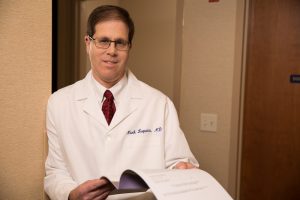 Jeffrey Lurie owns the Philadelphia Eagles. He’s the guy with the big checkbook, and he gets to say how the team is run. But he doesn’t get to call the offensive plays. That’s the coach’s job.

So why is it different in health care? Why do insurers get so much say in patient’s care, even when the coaches (health-care providers) do all they can to blow the whistle out on the field?

I have a patient who was diagnosed with polymyositis, an autoimmune disease. It is treated with high-dose steroids to reduce muscle inflammation, and with medications, such as Imuran, methotrexate, and IV immunoglobulins (IVIG), to suppress the hyperactive immune system.

My patient has had all of these treatments but still suffers from such muscle weakness that she cannot work. There’s another medication we can try. Rituximab is a blood-cancer medication that also has been studied in autoimmune diseases such as polymyositis, as well as rheumatoid arthritis and multiple sclerosis. UpToDate, a compendium of resources for physicians, recommends it for treatment of refractory myositis and, in fact, promotes using it before IVIG, which my patient has already received.

My patient’s insurer, Aetna, however, denied payment for Rituximab, saying its use would be considered off-label and contrary to company guidelines.

The first step to get the ruling reconsidered would be through what’s called a “peer-to-peer,” when the treating physician speaks with a doctor from the insurance company.

That sounds reasonable. But my peer-to-peer discussion was not with another rheumatologist, but with a pediatrician, who denied the drug because “it did not meet Aetna guidelines.”

The pediatrician advised me to appeal, which I did.

Three weeks later, an Aetna representative told me the appeal would take at least another month because there were so many appeals that had to be processed.

Remember, this is all time that my patient is still suffering and unable to work.

I asked whether I could do a peer-to-peer with a rheumatologist and was told no because I’d already had my peer-to-peer.

I asked for an expedited appeal and was told no, that’s only if the illness is immediately life threatening.

Ultimately, the Pennsylvania Medical Society helped get me in touch with Aetna’s senior director for medical health services for the Northeast region, who was extremely helpful. The medicine was approved within 24 hours, and my patient received her first dose Jan. 29.

Overall, this whole process cost my patient weeks of delay in care and forced me to spend several hours on the phone, sometimes even inconveniencing other patients waiting to see me.

All of which brings me back to my Eagles analogy.

Aetna has the checkbook here, but should it also be making the medical calls out in the field?

But when they decide that based on medical information, they are essentially practicing medicine on patients they have never seen.

I would never advocate that insurers cover absolutely anything patients and physicians ask for.

Rituximab is an expensive drug — the Wall Street Journal reported recently that Medicare pays $3,678 for a single vial. It also carries serious potential side effects. I would not use it if a remedy that carries fewer costs — both in side effects and in dollars — would do the job.

But for a patient like mine, for whom we have tried everything else, we need a better system to get her what she needs.

If a procedure or medication is denied, I feel the insurance company should be required to provide a better explanation than that it “does not meet the guidelines.” Furthermore, peer-to-peer reviews should be arranged with specialists. I would no more presume to offer advice to a pediatric specialist than I would expect a general pediatrician to advise me on rheumatology.

The ultimate question is how to be wise stewards of health-care dollars for the general population without sacrificing care to individuals like my patient. My experience is not an isolated one. I hope Aetna and other insurers are willing to work with physicians on an equitable compromise. I do recognize there are two sides to the story. We need more dialogue to resolve this. My patients depend on it.

EDITOR’S NOTE: The Inquirer asked Aetna to respond to Dr. Lopatin’s article. Though the company could not comment on this particular patient’s case, a spokesman provided this statement via email: “Aetna works hard to make sure our members receive safe, effective care that is supported by the best available medical evidence. We recognize there are unique clinical circumstances that require dialogue with physicians to help us find the best option for the patient. Although the process doesn’t always work as quickly as everyone would like, we strive to resolve appeals in a timely manner.”

Why change of venue is important to you By Dr. Mark Lopatin, MD The year…

Why does he have a painful, swollen ankle?